Synopsis:
Those who don’t know history are destined to repeat it. . . .

When seventeen year-old Jasper is approached at the funeral of his deadbeat father by a man claiming to be an associate of his deceased parents, he’s thrust into a world of secrets tied to America’s history—and he’s right at the heart of it.

First, Jasper finds out he is the sole surviving descendant of Benedict Arnold, the most notorious traitor in American history. Then he learns that his father’s death was no accident. Jasper is at the center of a war that has been going on for centuries, in which the descendants of the heroes and traitors of the American Revolution still duel to the death for the sake of their honor.

His only hope to escape his dangerous fate on his eighteenth birthday? Take up the research his father was pursuing at the time of his death, to clear Arnold’s name.
Whisked off to a boarding school populated by other descendants of notorious American traitors, it’s a race to discover the truth. But if Jasper doesn’t find a way to uncover the evidence his father was hunting for, he may end up paying for the sins of his forefathers with his own life.

Like a mash-up of National Treasure and Hamilton, Matthew Landis’s debut spins the what-ifs of American history into a heart-pounding thriller steeped in conspiracy, clue hunting, and danger.

Seventeen-year-old Jasper and his father, James, weren’t on the best of terms.  Still, despite years of neglect, strange behavior, and drunken bouts, his father’s sudden death comes as a surprise.  As does a strange presence at his father’s funeral, a man claiming to know James.  But Jasper quickly dismisses him and any connection to his delinquent father; he has more pressing concerns.  Now an orphan, Jasper faces losing all that remains of his past, his home, and his freedom.

Reluctant to accept an uncertain future in foster care, Jasper sells most of his valuables, saves what he can, and attempts to run away–to take control and survive on his own.  But when he least suspects it, he’s ambushed for reasons he has yet to grasp–reasons related to his father.  After their last-minute rescue spares his life, Jasper takes refuge in the League of American Traitors–a secret society comprising the heirs of American history’s most treacherous citizens.

Once among them, Jasper learns he is the last remaining descendant of Benedict Arnold, the notorious American traitor.  His father was on the trail of a hidden truth, one a rival organization has and is willing to kill to keep from coming to light.  One that could save Jasper and all those around him.  And Jasper may hold the keys to it all.

Jasper and his new friends–Sheldon, Lacy, Tucker, and Nora–must work together to finish what his father started to bring to an end a centuries-long battle between the sons and daughters of America’s heroes and traitors, before they pay for their failure with their lives.  Escape is not an option, but a lifelong game of cat and mouse.  The clock is ticking.  But, who can you trust when your only hope is a group with a treasonous heritage, and when loyalty is so easily bought?

With a combination of top secret organizations, American history, historical clues, and deception, League of American Traitors reads more like a dystopian novel than a typical historical mystery or thriller–with teens facing an inevitable fate of dueling to the death.  Filled with pop culture references, drama, sarcasm, and humor, it simultaneously broaches challenging topics in history and the modern era.*  Landis’s quick-paced narrative of thrills and treachery would only benefit from a thicker plot and a longer, less tidy conclusion.

Jasper and his friends are realistic (flaws and all) and offer a playful dynamic to what would be an otherwise grim tale.  Their blunders in casual and dire circumstances will make readers groan and grimace with and for these characters.  Though they endure some cliched characterizations and want further development, Jasper and crew work well together, and invite interest to the story and empathy to their plight.  With her independent spirit, keen observations, no-nonsense attitude, and exceptional skills, Nora is bound to be a favorite.  Their nemeses, on the other hand, are bad enough that you want them to lose.  Landis has crafted an entertaining historical treasure hunt brimming with enough peril and intrigue to divert young readers during the dog days of summer.

*Though, I can’t say I agree with how everything was handled–such as how suicide and mental health issues and sufferers were presented and discussed, or how slaves were regarded in terms loyalty through a historical lens.  Or how recompense is implied for past actions against natives through activity that has nothing to do with them or that they don’t benefit from.  I see the intent in the last case but it still falls short.  I can only hope the finished copies of this book improves in these areas before publication.

I received a free advanced copy of League of American Traitors as part of the FFBC Blog Tour in exchange for an honest review.

I love history, but not in the old, awful, kill-me-now-please kind of way. My passion is convincing my students that the past is actually hilarious, shocking, tragic, disturbing, and altogether UN-boring. While getting my graduate degree in History at Villanova, I realized that there was yet one more way to do this: write contemporary young adult books laced with history to convince my students that past isn’t as awful as they think. That’s a huge reason why I wrote The Judas Society.

Some other stuff: I love poetry but don’t understand it; I want Gordon Ramsay to give me a fatherly hug at some point; I tend toward the unapologetically dramatic; and (to my great shame) I didn’t read the Harry Potter series until last year. I’m also really good at covering up patent insecurities with self-deprecating humor (like this joke).

When Curiosity Killed the Cat– Q&A

A Dream Within a Dream– Promo

Never Too Many To Read– Creative Option 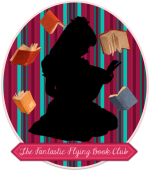