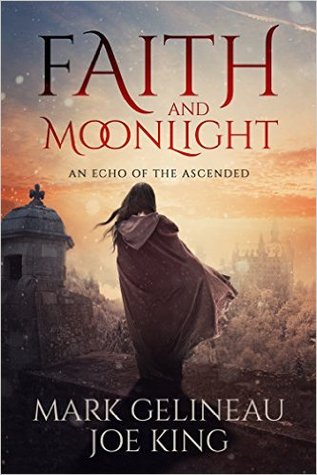 Roan and Kay are orphans.

A fire destroys their old life, but they have one chance to enter the School of Faith.

They are given one month to pass the entry trials, but as Roan excels and Kay fails, their devotion to each other is put to the test.

They swore they would face everything together, but when the stakes are losing the life they’ve always dreamed of, what will they do to stay together?

What won’t they do?

Once again, we return to the realm of the Ascended, Aedaron, and meet two new characters: Roan and Kay. After a devastating fire consumes their orphanage, the two youths set out to establish a new, more stable future. By enrolling in the School of Faith, a place where aspirants attempt to become one of the Razors of legend, Roan and Kay hope to stake their claim in history.

But doing so proves harder for Kay than she’d previously imagined. She and Roan are given one month to demonstrate the potential to become a Razor (an event called piercing the veil), a seemingly impossible task. So many take years to achieve this goal…and some never do.  Despite her best efforts and expert training from her new and willing friends, her childhood dream seems more elusive than ever, slipping further from her grasp. As is the time allotted to pierce the veil and show her worth, her connection to the First Ascended.

Roan, however, appears destined for greatness. With their guidance, his prefect, Erik, and other new friends only further hew Roan’s natural talent. And he isn’t the only one who notices.  But his accomplishment are overshadowed, his spirits dampened as his concern for Kay intensifies.

Tension grows between the two.  Threatening their friendship even as it hints at a budding romance.

As Roan’s grip on an illustrious fate tightens, Kay’s despondence increases…as does her desperation. Will Kay succumb to defeat?  How much is she willing to sacrifice to keep a dream and a friendship alive? Will Roan’s determination to remain by her side wane? Or could its strength destroy a promising future?

Clearly, Roan and Kay are in desperate straits.  But, is every offer of help to shape their destiny as genuine and selfless as it seems?

The world development and writing are excellent, the best in the series so far.  The setting, the School of Faith, is beautifully described–the structures and statues (which sound pretty impressive in their massive glory), the grounds, the attire, the rituals and pastimes.  I could go on, but I think you get my point.

One of my favorite aspects of the narrative is the lore, which explores the history of Razors and how they came to be, and explains how they develop now.  Something I’ve been eager to know since the first novella, but I like this slow reveal approach.  The School of Faith’s depiction, the factions among students and their range of expertise, their hierarchy and interplay all made for fascinating reading.  It grants us our first glimpse at young Razors before they become deadly weapons.

The action scenes are equally entertaining, of course.  What starts off as goodhearted fun among the students of different factions quickly becomes a more intense battle of strength, agility, and power between two duelers.  I took that “little” display as a bit of foreshadowing; I expect more conflict between those two in the next installment in this series, but we’ll see.  Obviously, there’s much more to learn–about Roan and Kay, the School, Aedaron, the Ascended.  And someone else, a highly skilled fighter–one of the best and one I overlooked initially.  After you read the story, you’ll know who I mean.

And the characters.  I couldn’t help feeling for them, especially Kay.  I’m sure many of us can relate to her struggle. Wanting something so badly only to find that it’s not attainable, or not as easily attainable, as it once seemed.

And Roan. Watching Kay’s pain and devastation, but helpless to remedy her situation.  Accepting that there are some things he can’t protect her from; some battles she must fight on her own.  The pain is palpable–as is the excitement brought on by their new environment and companions.  There’s a lot of conflict going on in their world–internal and external.

While I empathized with her, I did find it frustrating that Kay seemed to defeat herself before she even attempted some tasks.  Maybe her self-defeatism was brought on by the imposed time limit, her inexperience with fighting, her affliction for comparing her progress to others’.  I’m not sure.  I suppose we’ll find out more as their story develops, and we learn more about Kay and how she thinks.

Not all the characters are moody though.  Erik, Sabine, and Lillarn add a playfulness to the story that had me chuckling to myself.  (That drew a few looks in my direction. But I have no regrets.)

What I find so surprising about this novella (as well as its companions) is the striking amount of detail compressed into such a short work of fiction.  It skillfully manages to provide morsels of backstory, plot, and a few subplots.  Just enough to quell your appetite for now, and, yet, whet it for more to come. (Now, I’m really hungry.)

The ending is shocking, leaving room for an intriguing storyline for our two protagonists.  I’d really like to know just how powerful Roan is.  And what consequences Kay will face, and how soon.  I’m very eager to see what’s in store next for Roan and Kay, and how their all decisions will effect their futures together and apart.

*I received a free copy of Faith and Moonlight from NetGalley.*