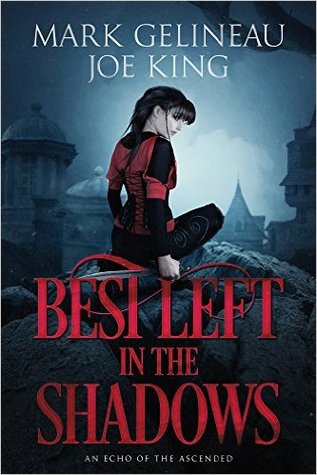 A Highside girl. Beaten. Murdered. Her body found on a Lowside dock. A magistrate comes looking for answers. For justice.
Alys trades and sells secrets among the gangs and factions of Lowside. She is a daughter of the underworld. Bold. Cunning. Free. When an old lover asks for help, she agrees. For a price.
Together, they travel into the dark heart of the underworld in search of a killer.

With Best Left in the Shadows, we revisit the realm of the Ascended (namely,  Aedaron), where fantastical creatures are the norm.  Only this time, our journey focuses on Alys–a sharp-tongued, cutthroat and information broker with plenty of street cred and connections. (I get the impression she’s a crafty street urchin all grown up.)  And, of course, Dax–a noble man of the law, seeking justice and Alys’s assistance in solving a murder.

The victim? All clues point to Lydia Ashdown, a Highside rebellious youth playing Juliet to a Lowside Romeo. At least, until she disappeared three months ago.  But, as Dax and Alys investigate further, they find that the truth is not always straightforward and things aren’t always what they seem. Not even concerning their relationship with one another.

The world-building is surprisingly detailed for a novella, giving one the sense of experiencing the story rather than just reading it. The writing style is generally pleasing, for the most part, but could benefit from more varied vocabulary. (The word “edge” was used quite a bit, which was a little distracting.) The pacing is a little slow in the beginning but picks during the actions scenes–which, I’ll admit, are my favorite parts of the story.  I love “seeing” Razors (i.e. supercharged fighters moving at lightning speed) in action.

The characters are both likable and really intriguing. Although Dax is technically leading the investigation, Alys really shines and captures the reader’s attention. She oozes with confidence as she strides the back alleys and rooftops of Lowside, but clearly knows when to pick her battles. Dax is endearing; he really cares about seeking justice and about his friends and…about Alys. Compared to Alys, he looks a little green, but their past together suggests he didn’t always walk the straight path.  And he still has a trick or two up his sleeve.

The case awakens some of their old feelings and arguments. The history between the two (…romance, betrayal, bitterness, lingering desire…) creates tension (at times) and cohesion (at others), and seems to play just beneath the surface of their banter.

I love interplay these two, how Alys knows Dax so well she practically sees through him in a single glance…

“… ‘Alright, Dax, besides the sword at your side, the short blade at your belt, and that dagger in your boot you think no one notices, what other weapons do you have on you?’
Dax glanced down toward his right boot with a grimace. ‘That’s all I’m carrying.’ …
Gesturing with his chin toward the large scythe strapped to her back, he smirked. ‘Do you think that they will even be looking at me with that horror you got back there?’
‘Me and Aunty,’ she said, reaching back to pat the scythe, ‘are known quantities here. …'”

And the ending?  Bittersweet, but understandable, adding a touch of realism to the tale.  Yet, it’s clear there’s much more in store for our two heroes, and they’re not done with each yet.

This series, An Echo of the Ascended,  has been amazing so far. And I need more… o.O So I will return to Aedaron with the next installment, Faith and Moonlight.

*I received a free copy of Best Left in the Shadows from NetGalley.*